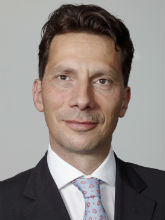 After law clerkship at the District Court of Affoltern (Zurich), he initially joined Homburger in 1994. He also holds an MBA from INSEAD in Fontainebleau, after which he worked in corporate finance for UBS. Benedikt Maurenbrecher became partner in 2002. Since 2015, he heads the firm's Financial Services team and is the Co-head of the Capital Markets group.